Elevated peak IOP as part of diurnal IOP fluctuations is an important risk factor for glaucoma progression.1 How do we adequately assess for this when only a few sampling of measurements are made periodically during office hours? The ability to obtain a wider range of physiologic IOPs during the daily life of a patient can provide powerful data to assist in treatment decision making.

Patient referred for surgical management. Her OS had a complicated course after trabeculectomy surgery with resultant chronic hypotony and poor vision. OD had advanced visual field loss and over the last 3 years was progressing despite office IOP measurements in the low teens and on 4 classes of medications. Both non-IOP and IOP-related factors for progression were considered, and the Icare HOME tonometer was prescribed for one week (Figure 1). 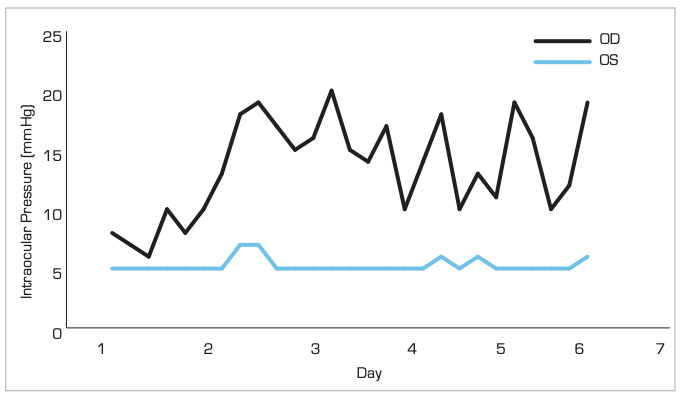 Icare HOME demonstrated IOP fluctuations with a high of 20mmHg in the morning. Risks and benefits of any procedure with the likely chance of further progression were considered. The decision to proceed with a subconjunctival microinvasive glaucoma surgery was made and successfully performed. After surgery, over the course of the year, IOP was controlled with pressures between 6– 8mmHg while taking no glaucoma medications.

Patient presented with IOP in the high teens and pressures approaching the low twenties pre-treatment. While using 3 glaucoma medications, the patient presented with visual field progression and central fixation loss over the last 2 years. The Icare HOME tonometer was prescribed to obtain a more accurate assessment of IOP control. Results indicated IOP fluctuations into the thirties OU.

Subconjuntival MIGS surgery was performed to achieve better IOP control in OS. The postoperative Icare HOME results showed a stable OS with minimal IOP fluctuations (Figure 2). The patient is currently off glaucoma medications and one year postoperative follow up showed a controlled IOP between 7–11mmHg. The OD has recently undergone the same procedure with similar early results (not shown in figure). 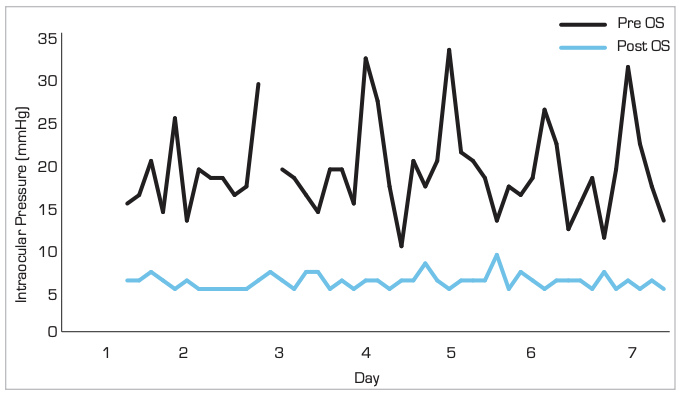 The timing and decision to escalate glaucoma therapy is not always clear. In higher risk and/or progressing patients, assessment of peak IOP and its fluctuations can assist in treatment escalation. An in-office IOP measurement may not accurately reveal peak IOP which is felt to be a significant factor for progression. IOP is dynamic and the Icare HOME tonometer provides an ability to obtain a better IOP profile to assist in treatment decision making.

THE CONUNDRUM OF PROGRESSIVE NORMAL PRESSURE GLAUCOMA: DO I AIM LOW OR FOR IOP STABILITY?

Over the past four years, in-office IOP have remained in the low teens, but the OCT and VF continued to deteriorate in the OD. The patient participated in a sleep study and 24-hour blood pressure monitoring with results unremarkable. Icare HOME was prescribed and confirmed significant peak IOP fluctuations from 7-20mmHg with a standard deviation of 3.5 (Figure 3). Despite similar office IOPs, OS showed less IOP fluctuations with the HOME and was non-progressive. 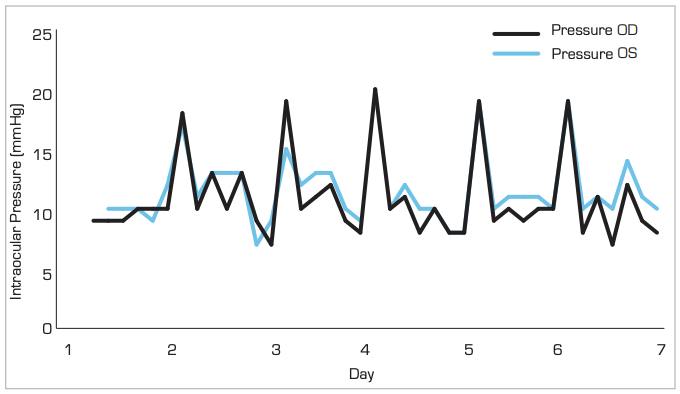 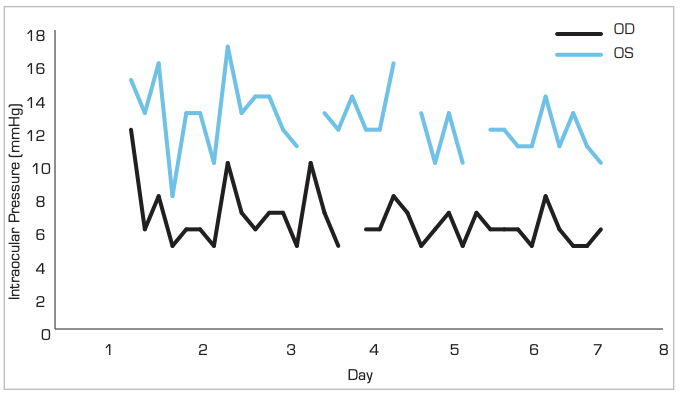 Progressive NPG patients are a conundrum as we consider both non-IOP and IOP-dependent factors.2–6 We are left with deciding target IOP when operating on these patients. Do we aim for single digits with a tight therapeutic window just above hypotony (ie., IOPs 6-8mmHg) or target IOPs around 12mmHg but ensure we keep peak IOPs at this level? The findings of an elevated peak IOP on diurnal testing may reduce the need (and risk) of aiming for aggressive sub-physiologic IOPs and addressing fluctuations more so with surgery.A low peak IOP would tilt us to be more aggressive with the choice of surgical procedure. IOPs can significantly fluctuate during the day. The Icare HOME tonometer adds an extra tool to our diagnosticarmamentarium.